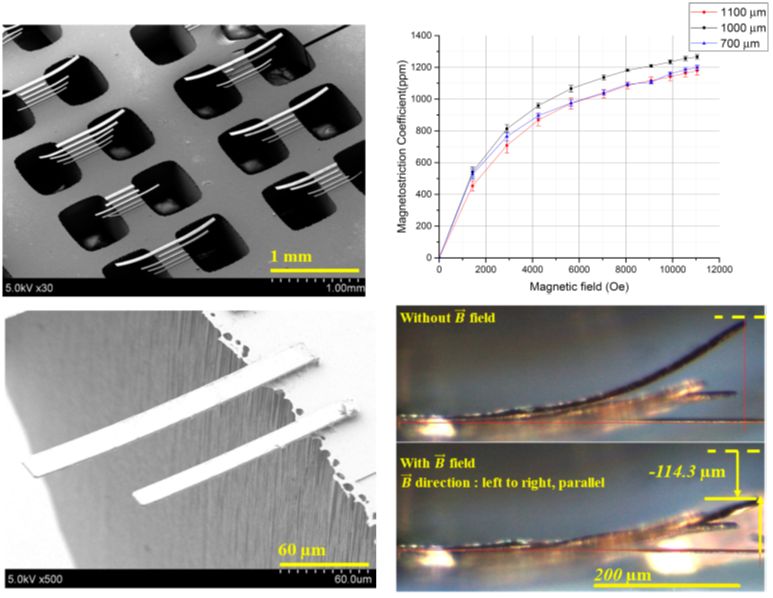 Developed an electrolytic plating process using an solution containing Tb, Dy, and Fe.
Achieves a higher energy density than the magnetostriction of solid materials.
Although it is small, it can generate a large force. 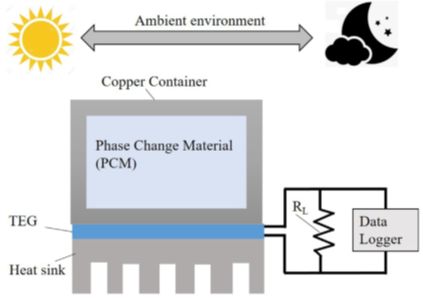 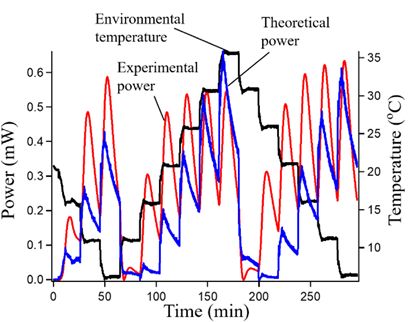 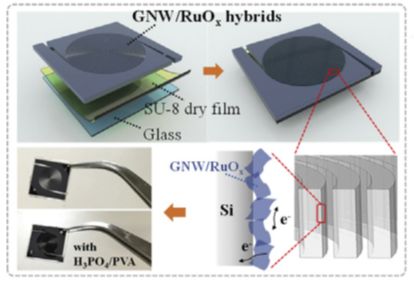 Utilizes the storage and discharge of electrical energy using electrochemical reactions.
It stores the energy of the energy harvester and stores a large capacity even though it is small.
The surface area is increased by the high-density nanostructure (graphene nanostructure), and the storage capacity is improved. Film formation by electroplating (reduction reaction on the substrate)
Fine particles are dispersed in the liquid to form a film containing nanoparticles.
Reduces heat conduction and improves performance as a thermoelectric film.
The particles in the crystal scatter phonons that transfer heat, reducing thermal conductivity. The resistance of the VO2 film changes significantly with changes in temperature.
The VO2 film was formed by sputtering or sol-gel method, and impurities were added to achieve high sensitivity.
Using the heat sensor with an enzyme fixed in the channel, we succeeded in detecting biological substances (glucose: blood glucose component), which was difficult to measure before. We have developed various thermal sensors for IR detection, biosensors, and hear detection of an individual biological cell. Resonant heat sensor are developed and applied to a calorimeter for the detection of heat from a brown fat cell. The measurement principle relies on the resonant frequency tracking of a Si resonator in temperature variation due to heat from a sample, and heat is conducted from the sample in water to the Si resonator in vacuum via a Si heat guide, as shown in Figure 4. A heat loss to surrounding and a dumping in water can be reduced by placing the resonant thermal sensor in vacuum. The fabricated resonant thermal sensor shows 1.6 mK of the temperature resolution, and 6.2 pJ of the detectable minimum heat. The heat from the single cell is detected in cases without any stimulation and with stimulation. As the results, pulsed heat production and continuous heat production are observed, respectively. The instrument contributes to future medical and biology.

Miniature healthcare monitoring devices and systems have been studied to prevent lifestyle diseases and keep health from analysis of biochemical molecules in body. The devices rely on high sensitive and functional sensors (Nanomechanical sensors, IR spectrometers, photoacoustic sensors and thermal sensors). For example, the nanomechanical sensors utilize stress detection of a nanomechanical structure from the displacements when molecules are adsorbed on the surface. Also in the thermal biosensors, enthalpy change of biochemical reaction using an enzyme is detected by a high sensitive heat sensor. Laboratory has been working on magnetic resonance force microscopy for three dimensional imaging in a nanoscale. A resonant sensor with a magnet is used to detect the flip of magnetic spins due to magnetic resonance. From the resonant frequency or vibration amplitude of the resonator, magnetic force between the magnet and spins in the sample can be detected. A Si nanowire probe with a micro magnet (Nd-Fe-B) and a Si mirror has been developed. The Si structure is fabricated by conventional microfabrication using electron beam lithography. In order to increase the Q -factor, the fabricated Si resonator is annealed at H2/N2 atmosphere. The vibration is measured using a fiber-optic interferometer in a vacuum chamber at room temperature. The detectable minimum force is estimated to be around 1× 10-17 N from thermomechanical noise signal at room temperature. Mapping of electron resonance is demonstrated on a small particle of PVBPT (Poly-10-(4-vinylbenzyl)-10H-phenothiazine). Also, in order to reduce the noise, mechanically-coupled resonators are investigated. Resonant signal is transferred to mechanically-coupled another resonator by mechanical synchronization. Using frequency up-conversion based on the synchronization, the noise floor of the sensor can be reduced. 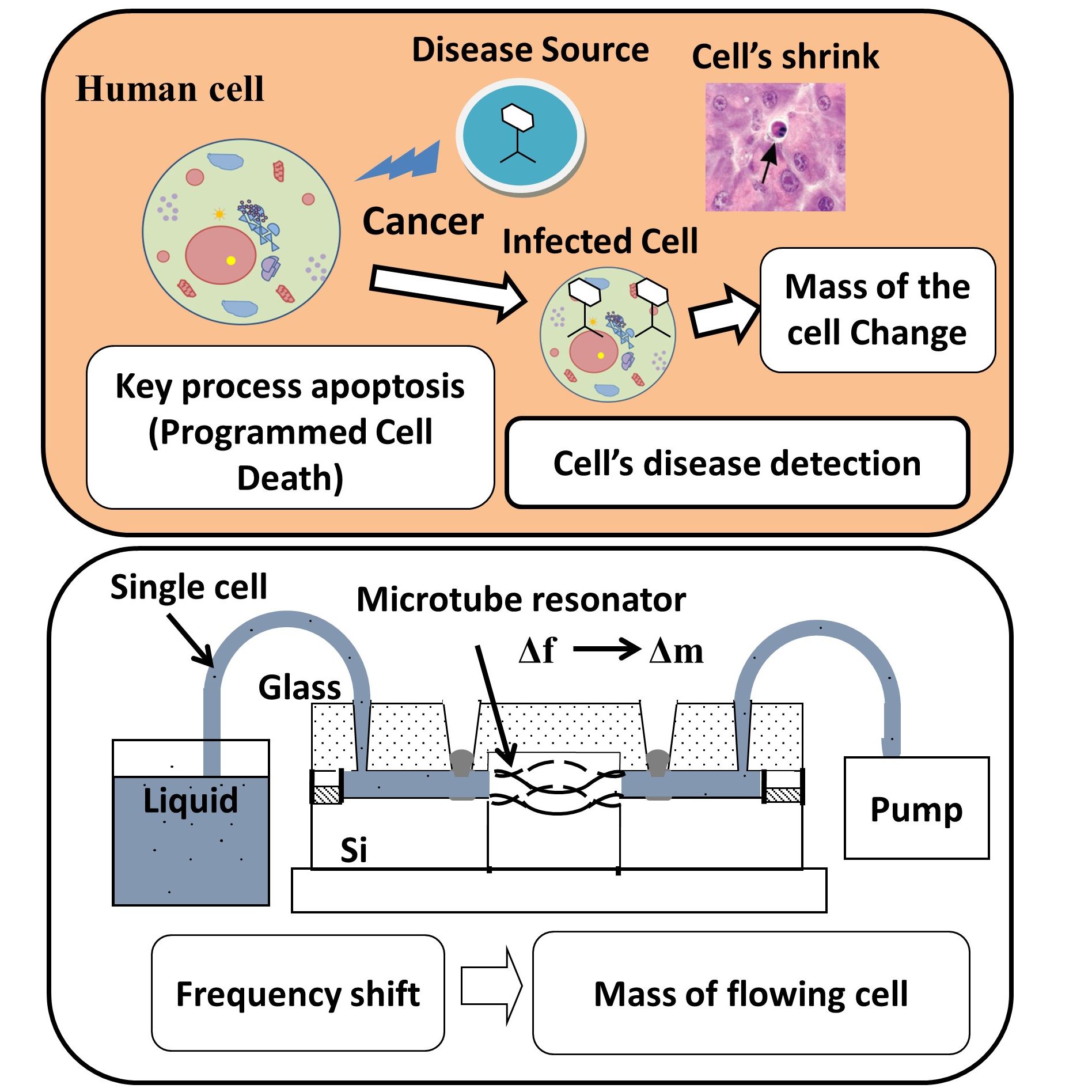 Researches on distributed infrared (IR) spectrometers have been conducted for emission gas (including greenhouse gases) monitoring in factories and chemical plants etc. Miniature Fourier transform IR spectrometer (FTIR) with a 8x8 mm2 spectrometer, also a dispersion type miniature spectrometer consisted of a linear array of IR sensors have been developed. The sensor can be distributed by miniaturization and applied to environment monitoring. 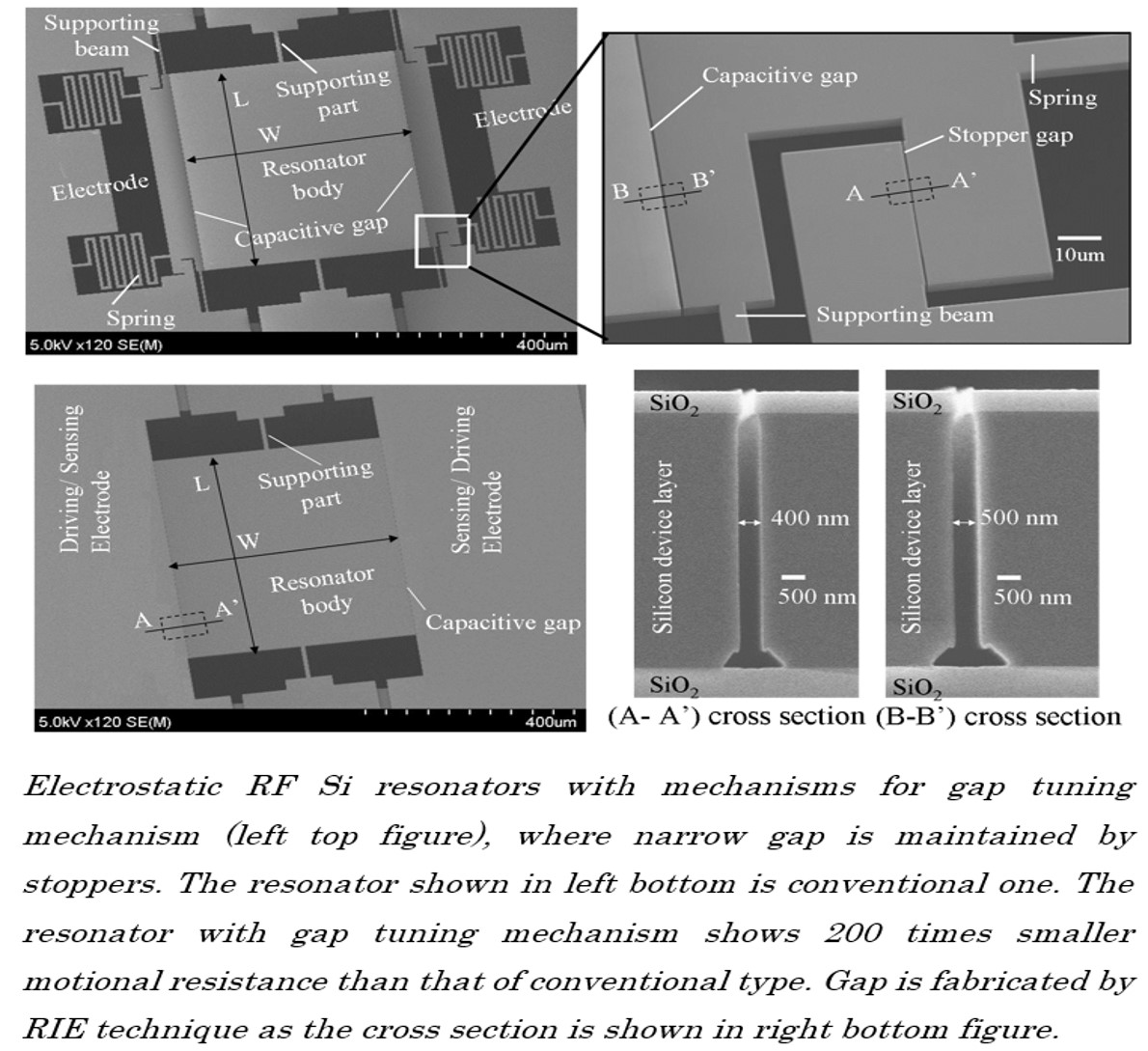 Timing devices, which create clock signal, are widely used for electronics, and generally quartz crystal oscillators are used. For recent mobile electronics and IoT devices, much smaller RF oscillators with a high temperature stability are required. We are working on Si micro/nanomechanical resonators and oscillators for above purpose. 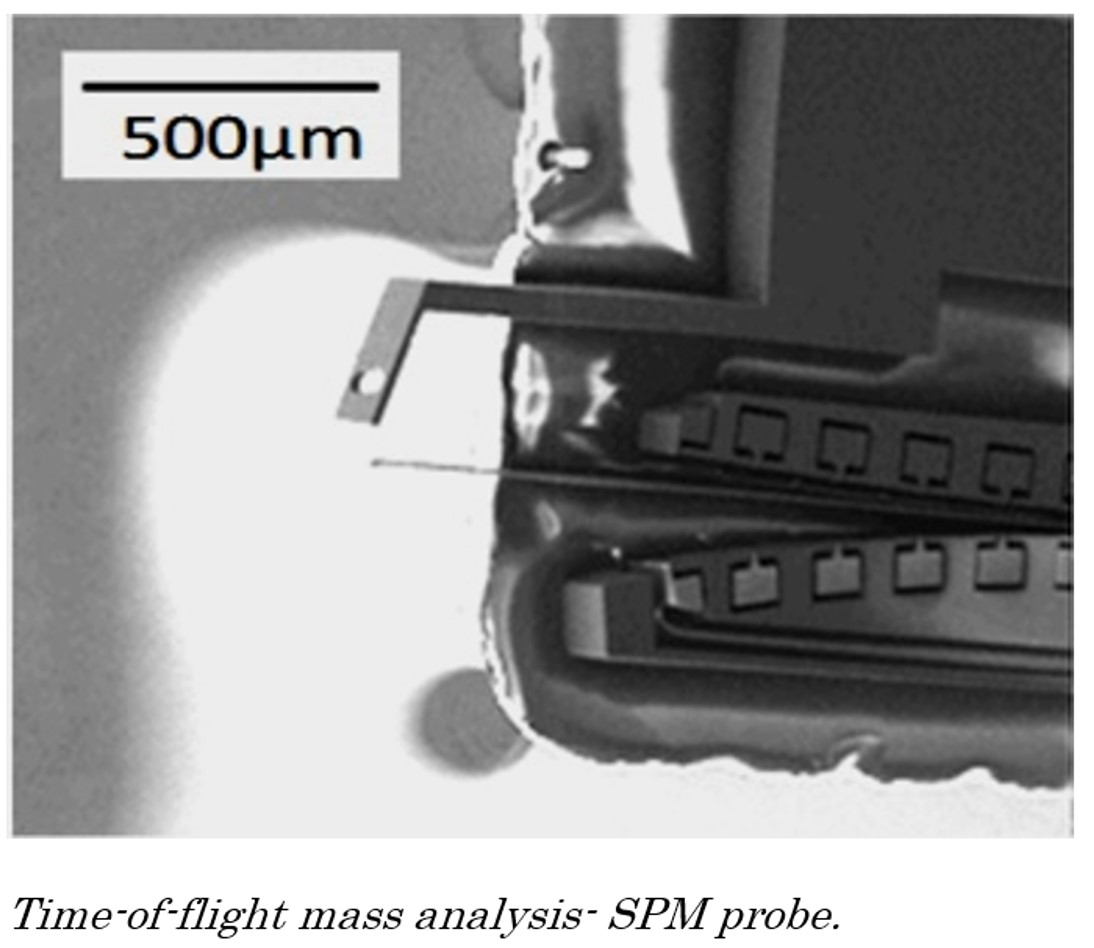 Scanning Probe Microscopy (SPM) families have been widely used as an essential tool in nanoscience, with applications in an increasing range of fields such as nanomaterials, bioscience and nanoengineering. Also the environment required for dynamic SPM is broadening, allowing applications as nanolithography, nano-oxidation, controlled deposition of molecules, fabrication of nanotransistors and molecular modification. Up to now, we have developed various microprobe technologies including probes for SPM, near-field microscopy, nanolithography and data storage. Figure shown below is a time-of-flight (TOF) mass analysis-SPM probe, which can handle atom or molecule on surface and analyze it mass using the TOF-mass SPM. The atoms picked up from surface can be emitted toward TOF-mass using the ring-shaped extra-electrode placed near the probe. The modes for surface observation and mass analysis can be switched by the electrostatic actuator. 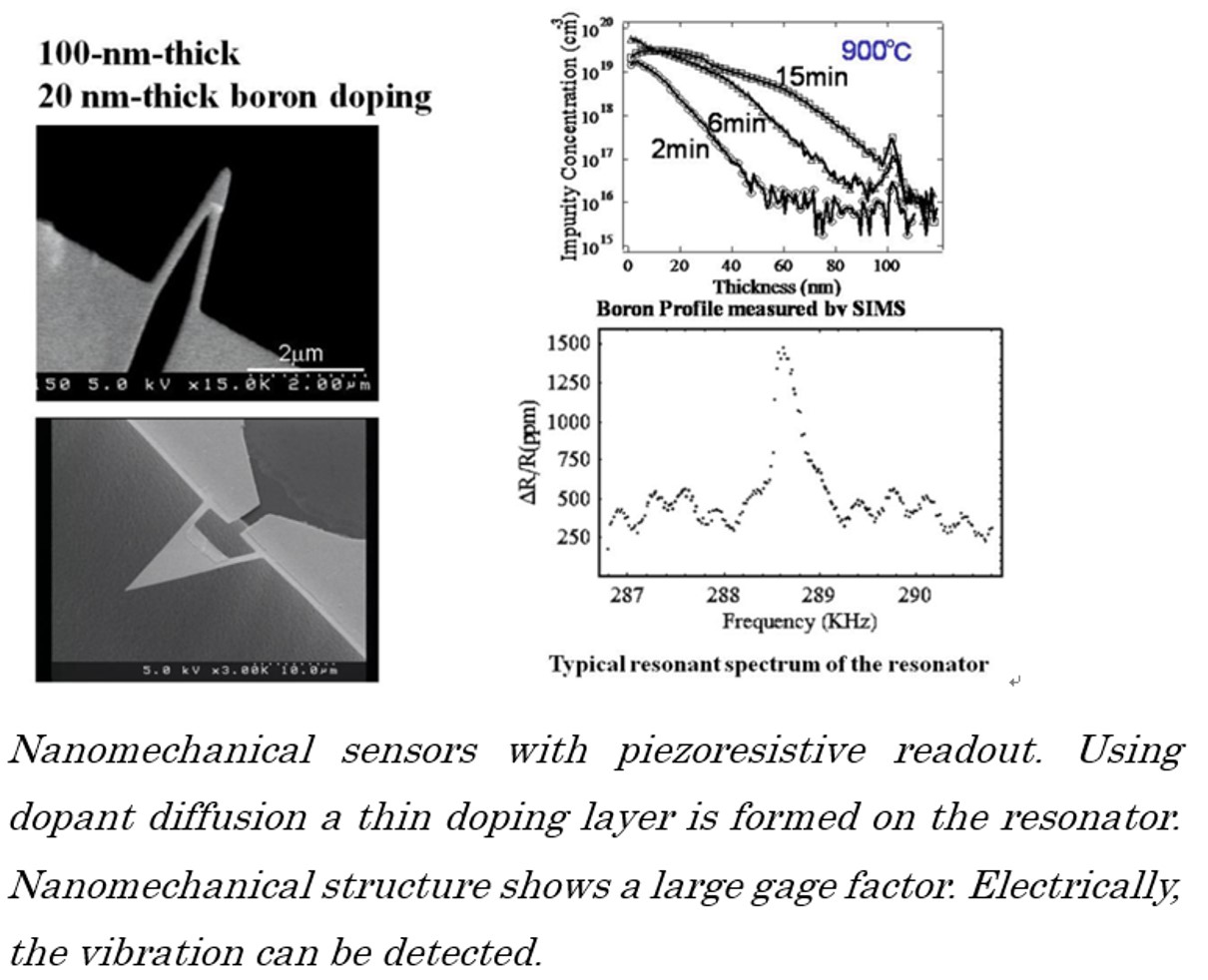 Researches on the nanomechanics of resonators and its applications have been conducted. High Q resonator can store the vibration energy from weak periodic physical interaction to the resonator, thus, high sensitivity to force, mass and heat etc. can be achieved. The minimum detectable value is limited by thermomechanical noise, which can be reduced by increasing the Q factor. Generally, surface defects and contaminants on the resonator significantly increase the vibration energy losses, which reduce the Q factor. We are working on the method to increase the Q factors by material selection, surface treatment and thermal annealing. Also as an application of the resonators, we are working on mass sensors, chemical sensors, force sensors, magnetic sensors and thermal sensors. Nanomechanical resonators often exhibit mechanical non-linearity, where the resonant frequency changes as increasing the vibration amplitude (Hard and soft spring effects). We found that the nanomechanical resonator shows strong non-linearity, which depends on the size and surface state. Using this non-linearity, novel applications will be developed for sensors, such as stochastic resonance and mechanical coupling for frequency conversion. Also a nonlinear damping effect, where the Q factor depends on the vibration amplitude, is investigated. 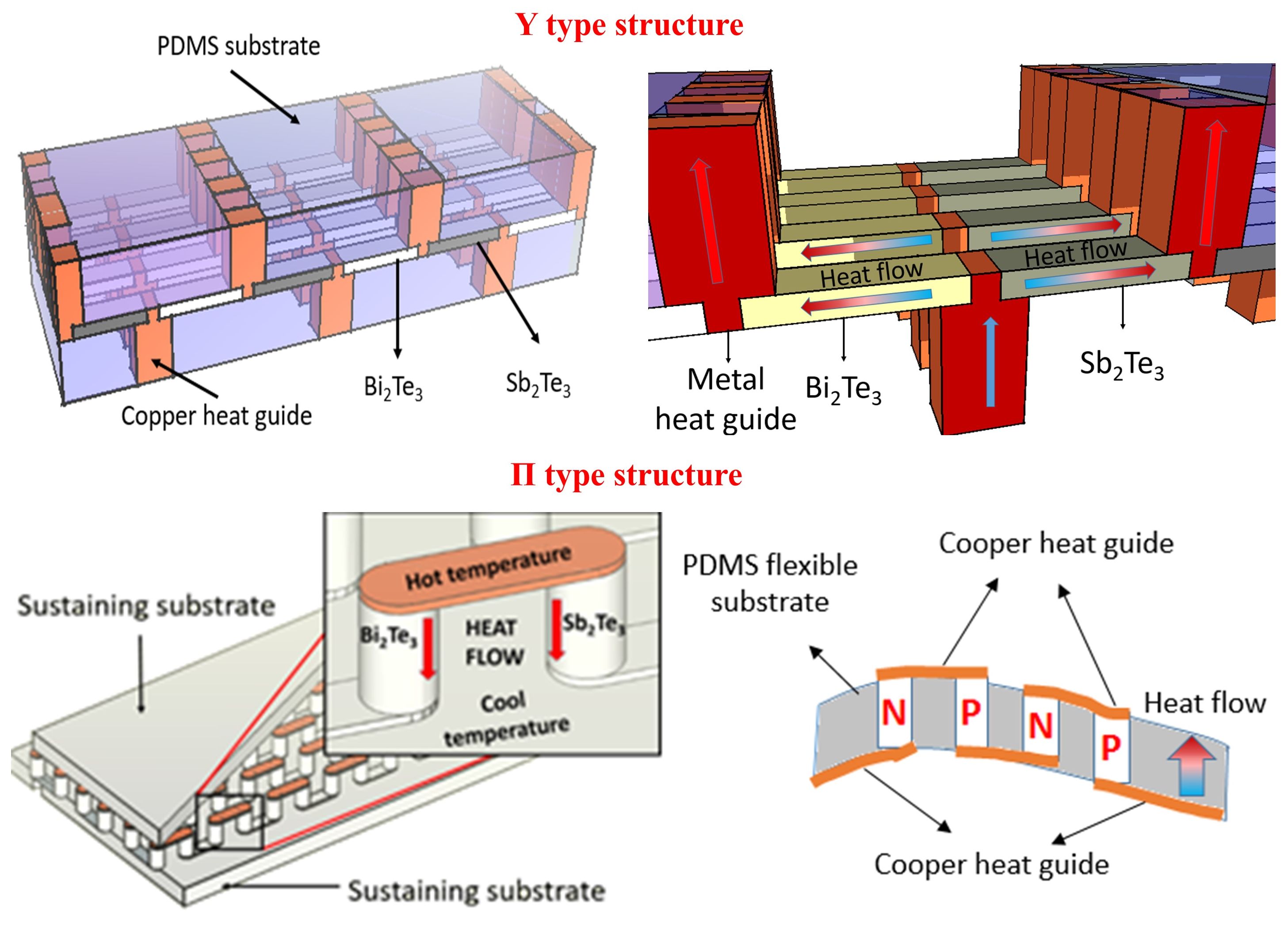 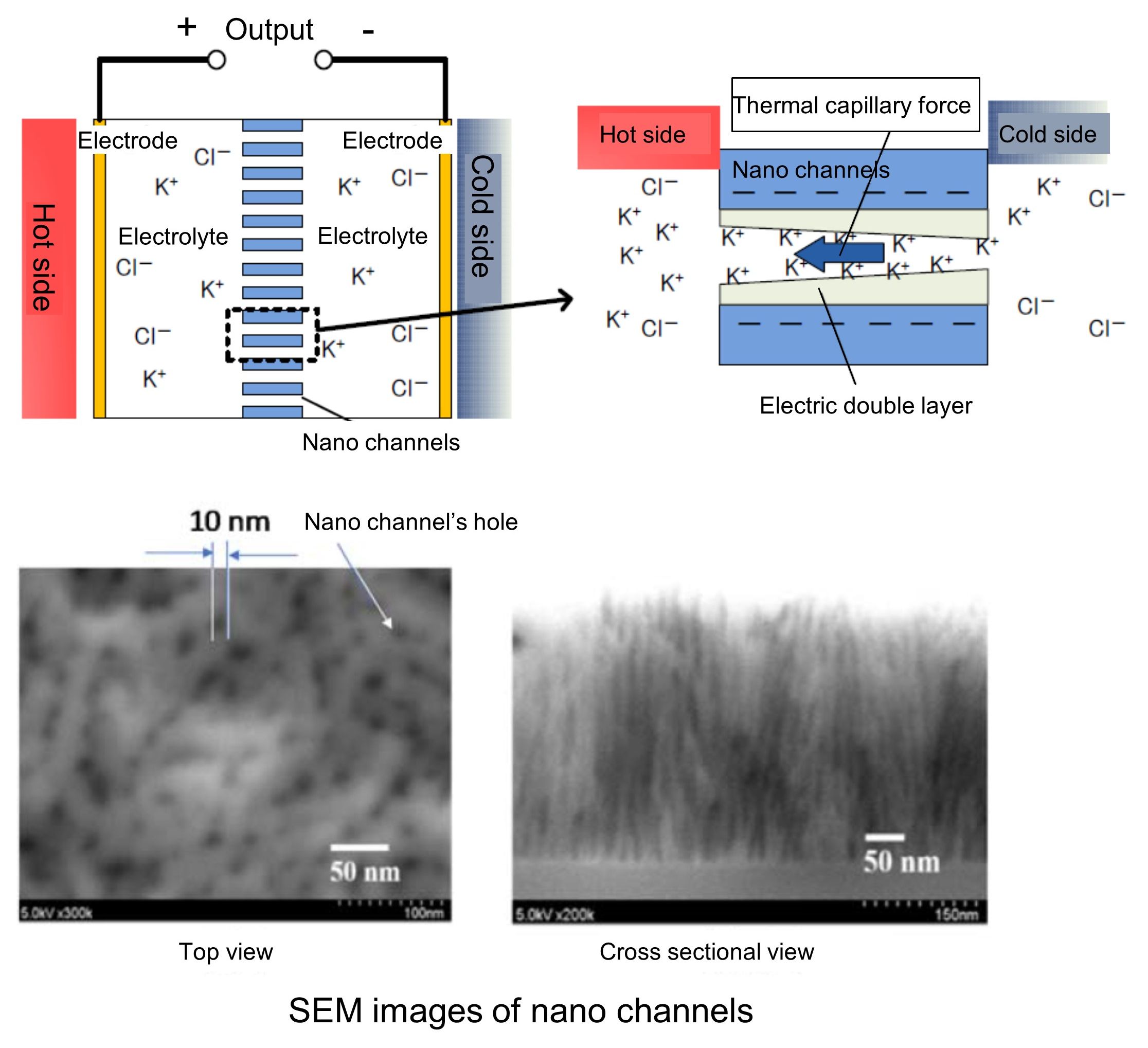 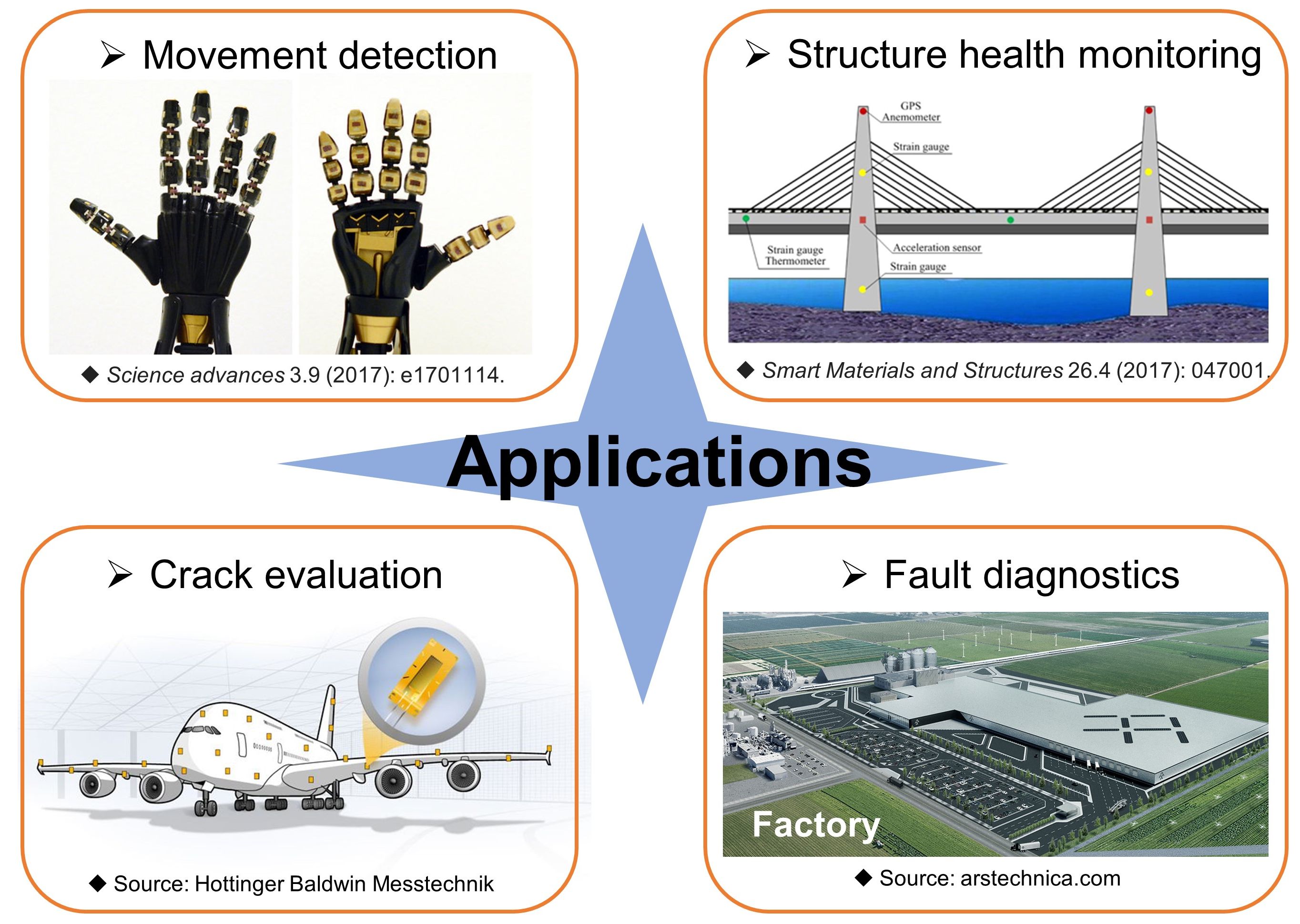 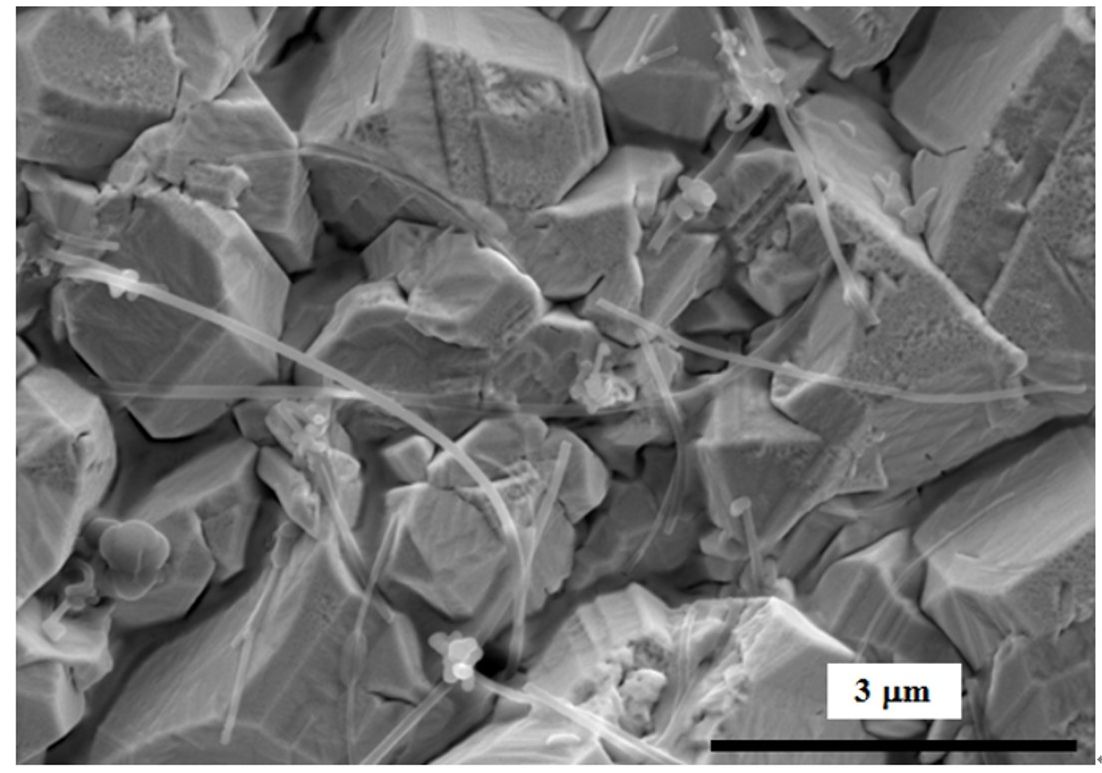 Various nanomaterials and their deposition methods have been studied for applications to sensors and micro/nanosystem in future. Selective growth techniques of carbon nanotubes and graphenes, electrodeposition technologies of nanocomposites, and growth of nanodiamond have been conducted. In addition, 2D material growth and application to nanomechanics are our interest. We develop a microstage that is able to produce a large displacement, high accuracy, a large stage area and high resonant frequency with low cost for positioning devices for scanning probe and miniature data storage systems. A displacement enlargement micromechanism is integrated in the stage. The microstage is made from a 400-μm-thick silicon substrate with a 200-nm-thick SiO2 layer. A metal electrode pattern is formed on it. The pattern and shape of the microstage were formed using photolithography and deep reactive ion etching processes. The stacked PZT actuator was fabricated from an N-10 (NEC/Tokin co.ltd) type 1-mm-thick PZT plate. 600 μm deep grooves with a pitch of 130 μm were produced using a 20 μm-thick dicing blade. Ni electrodes were then formed in the grooves using the electroplating process. After polishing both sides of the plate, polyimide was coated on the top side as an insulator. Next, electrical circuitry was formed by the photolithography. Figure(c) shows the fabricated stacked actuator. The PZT actuators are then slotted accurately into this well structure. Then, using pulsed electroplating of Ni, the PZT actuators are fixed by electroplating. Prior to the electroplating, thick photoresist was coated and patterned on the XY microstage structure. In addition, metal as a seed layer for electroplating is deposited. Figure shows the fabricated microstage containing the stacked PZT actuator. Ni was grown selectively at the locations where the seed metal became exposed. Actuation of the microstage are demonstrated. At applying voltage of 50 V, 20 μm of displacement is demonstrated. Also an XYZ microstage has been developed using a micro-assembly process.